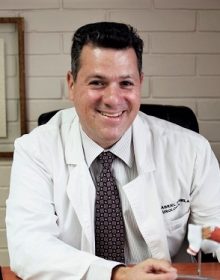 Dr. Gabriel Rámila is a highly-qualified surgeon who treats all illness and disease related to the urinary tract, prostate and genitals. Using the latest generation technology and methods, including lithotripsy, green light laser and bi-polar resection, Dr. Ramila performs over 400 surgeries per year, laser and conventional, to correct medical issues with the prostate and kidneys. With three additional years of specialized studies in urology, and extensive global experience, he is considered an expert in the field.

Dr. Rámila grew up in a family of doctors, so medical school became a natural choice for his university education. His formative years were spent in the United States, offering additional opportunities with English-speaking medical providers in Texas. Even now, he regularly attends worldwide medical conventions and symposia to stay well-informed about the most recent breakthroughs and developments in the field of urologic surgery and alternative treatments.

When patients notice symptoms like blood in the urine, or unusual color or odor, or they have trouble urinating, these are signs of a problem that needs medical attention. The doctor says, “At the first sign of symptoms, you should seek the attention and advice of a medical specialist to avoid an emergency”.

Kidney stones and enlarged prostate affect a large portion of the general population, and they are the illnesses that Dr. Rámila treats most frequently. Depending on the pathology results and general findings of primary testing, the doctor might order advanced ultrasound or computerized tomography (CT scan) to see the source of the problem in clear high-resolution digital imaging.

Shock wave lithotripsy has documented excellent success rates for the management of small to medium sized stones and calcifications in the kidney and ureter. SWL works by focusing intense sound waves on the stone, and causing it to shatter while minimising the effect on the surrounding tissue. The small pieces of stone then wash out of the kidney with normal urine flow, usually with little or no discomfort. There are no incisions or invasive procedures, so it can be done in one day as an outpatient procedure under general anesthesia.

Dr. Rámila says, “Laser surgery is by far the best for kidney stones, but maybe not for the gall bladder, ureter and bladder. Laser is most popular for treatment of the prostate, by sometimes not the best choice in all cases.”

Prostate cases are generally treated with the GreenLight™ Laser technique. This procedure uses the technology of high-powered laser light combined with fiber optics to vaporize the overgrowth of prostate cells quickly and accurately. As the surgeon directs the laser at the prostate, the intense pulses of light emitted from the fiber are absorbed by the blood. Within moments, the temperature of the blood becomes so great it causes the nearby cells to vaporize. It is being used as an alternative to transurethral resection of the prostate (TURP) and has been shown to be its equal in terms of effectiveness.

Endoscopic bipolar resection is the most recent technical solution. The clinical experience accumulated up to 2017 indicates that bipolar vaporization of the prostate is an effective and safe minimally invasive technique, providing very good hemostasis control and low complication rates. Dr. Rámila thinks this procedure is most suitable for use in patients from high-risk groups, including those with cardiac pacemakers, bleeding disorders, or under anticoagulant therapy.

The doctor says, “Bi-polar surgery of the prostate is equivalent or better than the present gold standard laser surgery. Bi-polar is a newer method that we are using to treat bigger prostates, with no absorption.”

You can trust Dr. Rámila to have solid experience in treating complex cases that might be beyond the ability of other surgeons, but the real reason for the successful results of his patinets is his human warmth, absolute honesty, and personalized care and attention.

Dr. Gabriel Rámila: Qué son los cálculos renales y cuál es el tratamiento?
How do your kidneys work? by Emma Bryce, for TED-Ed
How extracorporeal shockwave lithotripsy is used to treat kidney stones, by BUPA Health U.K.
How Do Kidney Stones Form? How Can We Prevent Them? By VIP Urology
TURis 2.0 - Bipolar Resection

“I first sought a medical consultation with Dr. Gabriel Ramila Falla in September 2016, for a bladder cancer condition.
From the outset, I felt very comfortable with the doctor´s open and informative style.
Following his thorough diagnosis and the subsequent sessions of his proposed treatment, I soon began to feel better,  prompting me to gain further confidence in his professional skills and ability to provide me with the pertinent therapies, which I had been so eagerly seeking.
As a token of my gratitude to Dr. Ramila Falla I will say that he met all my expectations and could not possibly ask for better treatment.”
Shasha

Peer Reviews From Other Doctors

Read here what other doctors have to say about this doctor

Dr. Rámila has continued to work with the Guatemalan Social Security Hospital system since his days as a surgical student in 2008 until the present, providing world-class modern medical technology to people who might not be able to afford that high level of attention without his assistance.

Request appointment with Dr. Gabriel Estuardo Rámila Falla
Your request will be received and processed by the clinic staff, who will contact you soon.